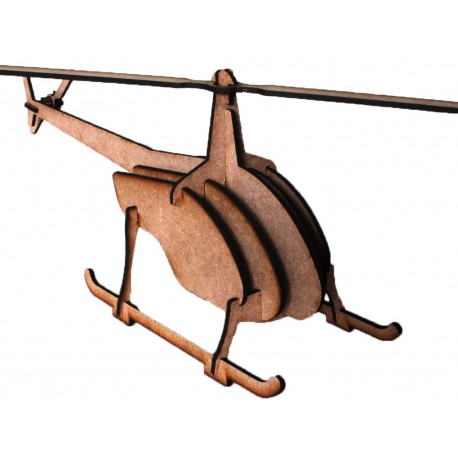 This Chopper 3D Puzzles is recommended for children of 5 years and older.

This Chopper 3D Puzzle is recommended for children of 5 years and older.

A helicopter is a type of rotorcraft in which lift and thrust are supplied by rotors. This allows the helicopter to take off and land vertically, to hover, and to fly forward, backward, and laterally. These attributes allow helicopters to be used in congested or isolated areas where fixed-wing aircraft would usually not be able to take off or land. The capability to hover efficiently for extended periods of time allows a helicopter to accomplish tasks that fixed-wing aircraft and other forms of vertical takeoff and landing aircraft cannot perform.

The word helicopter is adapted from the French language hélicoptère, coined by Gustave de Ponton d'Amecourt in 1861, which originates from the Greek helix/helik- (ἕλιξ) = "twisted, curved" and pteron (πτερόν) = "wing".English-language nicknames used for helicopters include chopper, helo and whirlybird.

Helicopters were developed and built during the first half-century of flight, with the Focke-Wulf Fw 61 being the first operational helicopter in 1936. Some helicopters reached limited production, but it was not until 1942 that a helicopter designed by Igor Sikorsky reached full-scale production, with 131 aircraft built. Though most earlier designs used more than one main rotor, it is the single main rotor with anti-torque tail rotor configuration that has become the most common helicopter configuration. Tandem rotor helicopters are also in widespread use due to their greater payload capacity. Quadrotor helicopters and other types of multicopter have been developed for specialized applications. (Wikipedia)