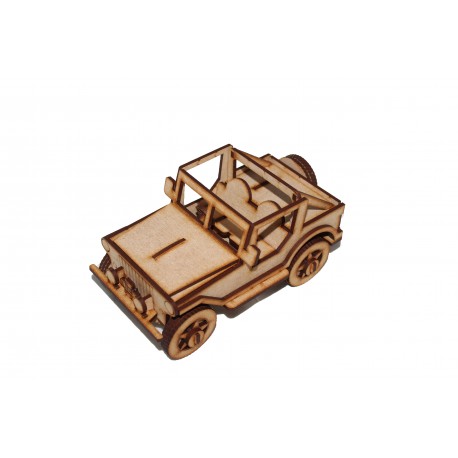 This Jeep 3D Puzzle is recommended for children of 7 years and older.

Jeep is a brand of American automobiles that is a division of FCA US LLC (formerly Chrysler Group, LLC), a wholly owned subsidiary of Fiat Chrysler Automobiles. The former Chrysler Corporation acquired the Jeep brand, along with the remaining assets of its owner American Motors, in 1987. Jeep's current product range consists solely of sport utility vehicles and off-road vehicles, but has also included pickup trucks in the past.

The original Jeep was the prototype Bantam BRC. Willys MB Jeeps went into production in 1941 specifically for the military, arguably making them the oldest four-wheel drive mass-production vehicles now known as SUVs. The Jeep became the primary light 4-wheel-drive vehicle of the United States Army and the Allies during World War II, as well as the postwar period. The term became common worldwide in the wake of the war. Doug Stewart notes:

The first civilian models were produced in 1945. It inspired a number of other light utility vehicles, such as the Land Rover. Many Jeep variants serving similar military and civilian roles have since been designed in other nations.