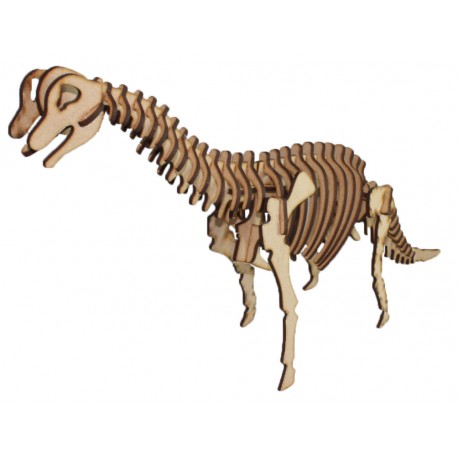 This Brachiosaurus 3D Puzzle is recommended for children of 5 years and older.

Instructions for assembly can be found in the download section under "more" if required.

This Brachiosaurus 3D Puzzle is recommended for children of 5 years and older.

Brachiosaurus is a genus of sauropod dinosaur from the Jurassic Morrison Formation of North America. It was first described by Elmer S. Riggs in 1903 from fossils found in the Grand River Canyon (now Colorado River) of western Colorado, in the United States. Riggs named the dinosaur Brachiosaurus altithorax, declaring it "the largest known dinosaur". Brachiosaurus had a proportionally long neck, small skull, and large overall size, all of which are typical for sauropods. However, the proportions of Brachiosaurus are unlike most sauropods. The forelimbs were longer than the hindlimbs, which result in a steeply inclined trunk. Also, while the tail is a typical long dinosaur tail, it was relatively short for a sauropod.

Brachiosaurus is one of the rarer sauropods of the Morrison Formation. The type specimen of B. altithorax is still the most complete specimen, and only a relative handful of other specimens are thought to belong to the genus. It is regarded as a high browser, probably cropping or nipping vegetation as high as possibly 9 metres (30 ft) off of the ground. Unlike other sauropods, and its depiction in the film Jurassic Park, it was unsuited for rearing on its hindlimbs. It has been used as an example of a dinosaur that was most likely ectothermic due to its large size and the corresponding need for forage, but more recent research finds it to have been warm-blooded. (Wikipedia)