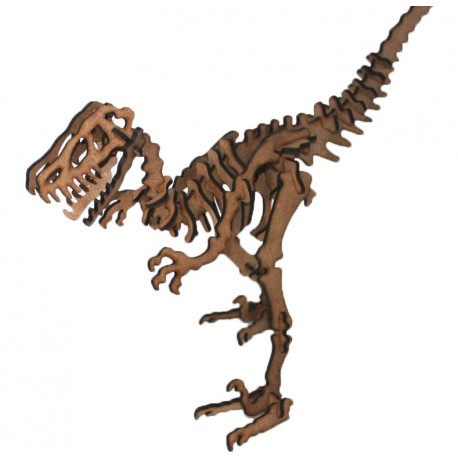 This Raptor 3D Puzzle is recommended for children of 5 years and older.

This Raptor 3D Puzzle is recommended for children of 5 years and older.

Velociraptor was a mid-sized dromaeosaurid, with adults measuring up to 2.07 m (6.8 ft) long, 0.5 m (1.6 ft) high at the hip, and weighing up to 15 kg (33 lb).The skull, which grew up to 25 cm (9.8 in) long, was uniquely up-curved, concave on the upper surface and convex on the lower. The jaws were lined with 26–28 widely spaced teeth on each side, each more strongly serrated on the back edge than the front.

Velociraptor, like other dromaeosaurids, had a large manus ('hand') with three strongly curved claws, which were similar in construction and flexibility to the wing bones of modern birds. The second digit was the longest of the three digits present, while the first was shortest. The structure of the carpal (wrist) bones prevented pronation of the wrist and forced the 'hands' to be held with the palmar surface facing inwards (medially), not downwards. The first digit of the foot, as in other theropods, was a small dewclaw. However, whereas most theropods had feet with three digits contacting the ground, dromaeosaurids like Velociraptor walked on only their third and fourth digits. The second digit, for which Velociraptor is most famous, was highly modified and held retracted off the ground. It bore a relatively large, sickle-shaped claw, typical of dromaeosaurid and troodontid dinosaurs. This enlarged claw, which could be over 6.5 cm (2.6 in) long around its outer edge, was most likely a predatory device used to tear into prey, possibly delivering a fatal blow.

As in other dromaeosaurs, Velociraptor tails had long bony projections (prezygapophyses) on the upper surfaces of the vertebrae, as well as ossified tendons underneath. The prezygapophyses began on the tenth tail (caudal) vertebra and extended forward to brace four to ten additional vertebrae, depending on position in the tail. These were once thought to fully stiffen the tail, forcing the entire tail to act as a single rod-like unit. However, at least one specimen has preserved a series of intact tail vertebrae curved sideways into an S-shape, suggesting that there was considerably more horizontal flexibility than once thought.

In 2007, paleontologists reported the discovery of quill knobs on a well-preserved Velociraptor mongoliensis forearm from Mongolia, confirming the presence of feathers in this species. (Wikipedia)