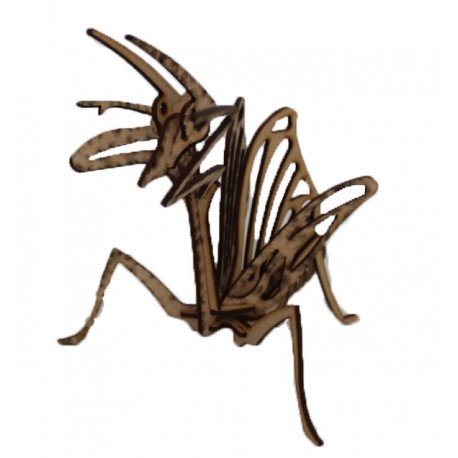 This Praying Mantis 3D Puzzles is recommended for children of 7 years and older.

This Praying Mantis 3D Puzzles is recommended for children of 7 years and older.

Mantises have two grasping, spiked forelegs ("raptorial legs") in which prey items are caught and held securely. In most insect legs, including the posterior four legs of a mantis, the coxa and trochanter combine as an inconspicuous base of the leg; in the raptorial legs however, the coxa and trochanter combine to form a segment about as long as the femur, which is a spiky part of the grasping apparatus (see illustration). Located at the base of the femur are a set of discoidal spines, usually four in number, but ranging from zero to as many as five depending on the species. These spines are preceded by a number of tooth-like tubercles, which, along with a similar series of tubercles along the tibia and the apical claw near its tip, give the foreleg of the mantis its grasp on its prey. The foreleg ends in a delicate tarsus made of between four and five segments and ending in a two-toed claw with no arolium and used as a walking appendage.

The mantis thorax consists of a prothorax, a mesothorax, and a metathorax. In all species apart from the genus Mantoida, the prothorax, which bears the head and forelegs, is much longer than the other two thoracic segments. The prothorax is also flexibly articulated, allowing for a wide range of movement of the head and forelimbs while the remainder of the body remains more or less immobile. The articulation of the neck is also remarkably flexible; some species of mantis can rotate the head nearly 180 degrees.

Mantises may have a visual range of up to 20 metres. Their compound eyes may comprise up to 10,000 ommatidia. The eyes are widely spaced and laterally situated, affording a wide binocular field of vision) and, at close range, precise stereoscopic vision. The dark spot on each eye is a pseudopupil. As their hunting relies heavily on vision, mantises are primarily diurnal. Many species will however fly at night, and then may be attracted to artificial lights. Nocturnal flight is especially important to males in search of less-mobile females that they locate by detecting their pheromones. Flying at night exposes mantises to fewer bird predators than diurnal flight would. Many mantises also have an auditory thoracic organ that helps them to avoid bats by detecting their echolocation and responding evasively.(Wikipedia)