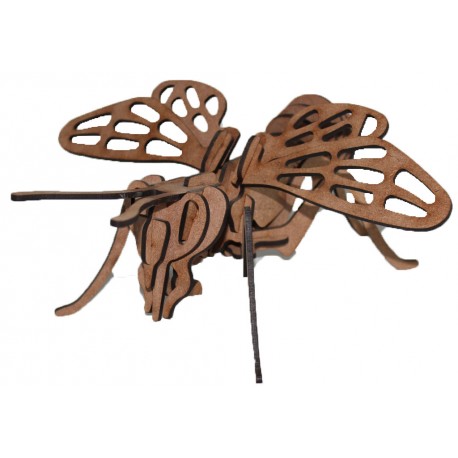 This Honey Bee 3D Puzzle is recommended for children of 5 years and older.

This Honey Bee 3D Puzzle is recommended for children of 5 years and older.

Honey bees (or honeybees) are a subset of bees in the genus Apis, primarily distinguished by the production and storage of honey and the construction of perennial, colonial nests out of wax. Honey bees are the only extant members of the tribe Apini, all in the genus Apis. Currently, there are only seven recognised species of honey bee with a total of 44 subspecies, though historically, anywhere from six to eleven species have been recognised. Honey bees represent only a small fraction of the approximately 20,000 known species of bees. Some other types of related bees produce and store honey, but only members of the genus Apis are true honey bees.

The first Apis bees appear in the fossil record at the Eocene–Oligocene (23–56 Mya) boundary, in European deposits. The origin of these prehistoric honey bees does not necessarily indicate that Europe is the place of origin of the genus, only that it occurred there at that time. There are few known fossil deposits in South Asia, the suspected region of honey bee origin, and fewer still have been thoroughly studied.

No Apis species existed in the New World during human times before the introduction of Apis mellifera by Europeans. There is only one fossil species documented from the New World, Apis nearctica, known from a single 14-million-year old specimen from Nevada.

The close relatives of modern honey bees—e.g. bumblebees and stingless bees—are also social to some degree, and social behavior seems a plesiomorphic trait that predates the origin of the genus. Among the extant members of Apis, the more basal species make single, exposed combs, while the more recently evolved species nest in cavities and have multiple combs, which has greatly facilitated their domestication.

Most species have historically been cultured or at least exploited for honey and beeswax by humans indigenous to their native ranges. Only two of these species have been truly domesticated, one (Apis mellifera) at least since the time of the building of the Egyptian pyramids, and only that species has been moved extensively beyond its native range. (Wikipedia)