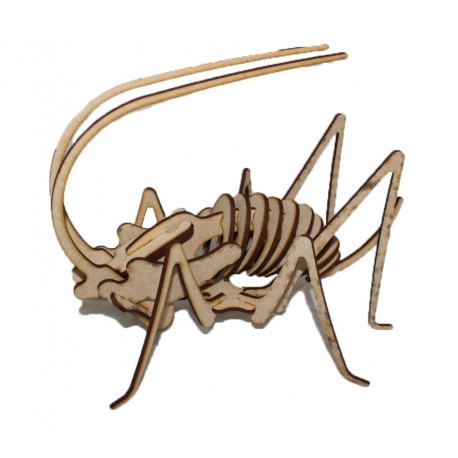 This Cricket 3D Puzzle is recommended for children of 5 years and older.

This Cricket 3D Puzzle is recommended for children of 5 years and older.

Crickets, family Gryllidae (also known as "true crickets"), are insects somewhat related to grasshoppers, and more closely related to katydids or bush crickets (family Tettigoniidae) and Weta (families Anostostomatidae and Rhaphidophoridae). They have somewhat flattened bodies and long antennae. There are more than 900 species of crickets. They tend to be nocturnal and are often confused with grasshoppers because they have a similar body structure including jumping hind legs. Crickets are harmless to humans.

The sound emitted by crickets is commonly referred to as chirping; the scientific name is stridulation. Only the male crickets chirp. The sound is emitted by the stridulatory organ, a large vein running along the bottom of each wing, covered with "teeth" (serration) much like a comb. The chirping sound is created by running the top of one wing along the teeth at the bottom of the other wing. As the male cricket does this, he also holds the wings up and open, so that the wing membranes can act as acoustical sails. It is a popular myth that the cricket chirps by rubbing its legs together.

There are four types of cricket song: The calling song attracts females and repels other males, and is fairly loud. The courting song is used when a female cricket is near, and is a very quiet song. An aggressive song is triggered by chemoreceptors on the antennae that detect the near presence of another male cricket and a copulatory song is produced for a brief period after a successful mating.

Crickets chirp at different rates depending on their species and the temperature of their environment. Most species chirp at higher rates the higher the temperature is (approximately 62 chirps a minute at 13°C in one common species; each species has its own rate). The relationship between temperature and the rate of chirping is known as Dolbear's Law. According to this law, counting the number of chirps produced in 14 seconds by the snowy tree cricket common in the United States and adding 40 will approximately equal the temperature in degrees Fahrenheit.

Crickets, like all other insects, are cold-blooded. They take on the temperature of their surroundings. Many characteristics of cold-blooded animals, like the rate at which crickets chirp, or the speed at which ants walk, follow an equation called the Arrhenius equation. This equation describes the activation energy or threshold energy required to induce a chemical reaction. For instance, crickets, like all other organisms, have many chemical reactions occurring within their bodies. As the temperature rises, it becomes easier to reach a certain activation or threshold energy, and chemical reactions, like those that occur during the muscle contractions used to produce chirping, happen more rapidly. As the temperature falls, the rate of chemical reactions inside the crickets' bodies slow down, causing characteristics, such as chirping, to also slow down.